The Big 5 are high on the to-do list of South Africa’s visitors and Addo Elephant Park is one of the best and most convenient places to see these large mammals. In fact Addo is now home to the “Big 7”. Situated close to the famous Garden Route, malaria-free, two-wheel drive accessible and within reach of a number of other attractions Addo is a perfect introduction to the African wilderness.

It’s early in the morning, not long after sunrise. We’re waiting for the day to warm up as we stare at a waterhole within Addo Elephant National Park. Apparently this is the spot where the world’s largest land animal comes to for its morning ablutions; the gatekeeper at the entrance to the park was very sure of this. The waterhole is quiet and except for a few warthogs on the way in and some elephant dung, there has been no sign of Africa’s famous wildlife. Just as we’re about to give up, we hear a rumble. The ground starts trembling and suddenly we’re surrounded by trunks, tusks and all the rest. The elephants are so close, you could almost touch them. With wide eyes and open jaws a car full of European city slickers watches the heavy beasts in disbelief. Welcome to Africa! 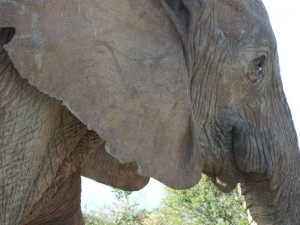 It doesn’t matter how many elephants you see, the giant pachyderms never cease to fascinate. Seeing an animal of this size walk within a few metres of your car window is humbling and uplifting at the same time. Addo Elephant Park is home to more than 450 specimen in an area of 180 000 hectares. The elephants are joined by 48 of the endangered black rhino, 400 Cape buffalo, lion and a few elusive leopards to complete the Big 5. Since the coastal area of Woody Cape, St Croix Island and Bird Island have been added to the park in 2002 Addo boasts five of South Africa’s seven major vegetation zones. The costal section is home to the largest breeding colony of Cape gannets as well as Cape fur seals and African penguins. The Southern right whales and the great white shark inhabit the waters of the Eastern Cape and turn Addo’s Big 5 into the Big 7. Unfortunately you won’t see whales or sharks during any of the game drives in the park.

One of Addo’s most popular inhabitants is also one of its smallest. The flightless dung beetle is ever busy rolling elephant dung into balls and moving them around with its hind legs. The national park also hosts a variety of antelope including kudu, eland, hartebeest and bushbuck. Zebras are often seen and warthogs are everywhere. 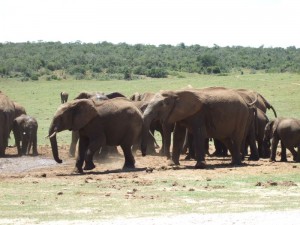 While Addo Elephant National Park is not as wild as Kruger or the Kgalagadi, it protects a large number of African animals in their natural habitat. Addo’s 180 000 hectares already make it South Africa’s third largest national park and expansion plans will increase the size of the park to 264 000 hectare in the near future. Waterholes throughout the park offer great game viewing opportunities and the main camp has a floodlit waterhole that allows for game viewing by night. Guests can drive their own vehicle through the park or join a guided game drive and hop-on guides provide an affordable alternative.