Forced removals are one of the major issues in South Africa’s recent history. The District Six Museum in Cape Town deals with these painful memories in a sensitive and authentic manner. The presentation of the artefacts and information is so full of life that visitors cannot help being moved.

People love the sunshine in Cape Town, but when the winter rain sets in the outdoor fun comes to a screeching halt. However, this is no reason to feel bleak as the Mother City’s rich history is something that can easily be discovered indoors. A little less light-hearted, the District Six Museum will be one the most memorable and stirring episodes of your Cape Town visit. 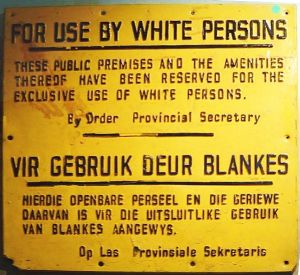 Once a vibrant community, the area known as District Six is looking pretty bleak at present. A whole community was uprooted and buildings demolished just to then abandon the land. After centuries of neglect District Six is now redefining its identity.

Nestled between the harbour and the city centre the Sixth Municipal District of Cape Town once accommodated a vibrant mix of freed slaves, merchants, artisans, immigrants and labourers. Constituting a tenth of Cape Town’s population District Six was the heart and soul of the city.

The decline began when black South Africans were forcefully resettled as early as 1901. While the wealthier inhabitants started moving to the suburbs the area became increasingly neglected. The Group Areas Act of 1950 allowed the government to declare the neighbourhood on the slopes of Devil’s Peak a white area. 60 000 people were forcefully moved to the infertile land of the Cape Flats by 1982. The houses were bulldozed. One of the Mother City’s liveliest areas was now dead. Completely.

The District Six Museum is more than just a collection of dusty artefacts. What started off as the District Six Museum Foundation in 1989 is now a full-blown heritage project. The museum that was established in 1994 offers a space for reflection and education for visitors as well as those involved.

The museum on Buitenkant Street succeeds in bringing history to new life. The involvement of the community gives the display a very authentic feel. First hand reports, many artefacts, moving photography from private albums and detailed information take the visitor back in time.

While it would be easy aim for guilt or pity, the trustees introduce people to the lively pre-apartheid District as well as the tragic times of forced removal. The local bands feature next to the mountain clubs and vivid accounts of the daily life. A particularly moving feature is the large map in which the former residents have entered their houses.