What is traditional South African food? The diversity of the Rainbow Nation makes this kind of question hard to answer, but when in Cape Town you should definitely try some of the fragrant Cape Malay dishes. The recipes for bobotie, bredie and Malay curries have been passed down and perfected over generations. An interactive cooking tour is not only a great chance to savour these delicate flavours, but also one of the most authentic experiences Cape Town has to offer.

Cape Malay Culture and the Bo-Kaap 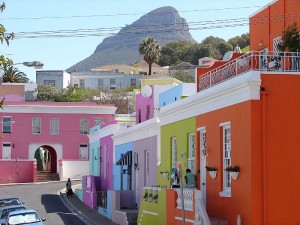 The Bo-Kaap on the slopes of Signal Hill is the spiritual anchor of the Cape’s Muslim community. Overlooking the city centre extravagantly coloured houses cling to the steep cobblestone roads of the Cape Malay Quarter. The demonym “Cape Malay” is somewhat misleading as the people known by this term come from very diverse backgrounds. Many of the Bo-Kaap’s residents descend form slaves brought to the Cape by the Dutch from Malaysia, Indonesia and the African continent. The Cape Malay community thrived in Cape Town, becoming one of the most influential ethnic groups and introducing Islam to South Africa.

The Bo-Kaap is one of the most visually distinct parts of Cape Town with brightly coloured houses, quaint cobblestone alleys and historic buildings such as the Bo-Kaap Museum from the 1760s or South Africa’s first official mosque, the Auwal.

One of the most authentic and stimulating experiences in Cape Town is a Cape Malay cooking tour. A guided tour takes you through historical Bo-Kaap and to the Bo-Kaap Museum. After your introduction to Cape Malay culture and history the experience becomes hands-on as you join a local family in the preparation of a traditional Cape Malay meal.

An overwhelming diversity of scents, colours and tastes awaits you in the local shops, as you stroll though cardamom, ginger, cinnamon, coriander and piles of fresh vegetables.  As the family invites you into their kitchen for a hands-on workshop, the secrets of spice combinations and cooking methods are revealed. Your nose and taste buds are taken on a sweet and fragrant adventure as you learn to prepare masala, samoosas, sosaties or bredie.

The highlight or the day is of course the meal. There is nothing that beats a home cooked meal and the combination of sweet and savoury flavours with the subtle fragrances of oriental spices is sure to fill your tummy and warm your heart.

A Cape Malay cooking tour includes the entrance to Bo-Kaap Museum, a full meal and a small gift pack. Please address the Cape Paradise staff for more information or to make a booking.