See Tretchikoff at the Iziko Gallery

“The People’s Painter” is one of the most important artists in South Africa’s history and one of the best-selling artists internationally. The Iziko South African National Gallery now acknowledges Vladimir Tretchikoff’s legacy with a comprehensive exhibition that is one of the cultural highlights of this year’s winter. 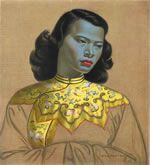 While Tretchikoff’s place in art history is the object of much debate, his status as one of the best-selling painters is something that cannot be ignored. The “King of Kitsch” pioneered the distribution of affordable copies, which made him incredibly popular with the working class. Tretchikoff’s works made their way from the mantelpieces of private homes into popular culture. By the 1960s Tretchikoff’s exhibitions were attracting record-breaking crowds and stealing even Picasso’s thunder. Today the Chinese Girl (also known as The Green Lady) is the world’s best-selling print with more than half a million copies sold.

The King of Kitsch

The self-taught painter’s unequalled popularity in the 1960s and 1970s not only made him “The People’s Painter”. Many regarded Tretchikoff as “The King of Kitsch”; a title he himself never liked. Tretchikoff considered himself a serious artist, while other others questioned his work and saw no contribution to the arts in it.

While the elite seem to be doubtful of the quality of Tretchikoff’s work, the masses speak clearly in his favour. South African’s have a special relationship with the Russian born artist.

After working for opera houses and publishing companies in China and opening an arts school in Singapore, Vladimir Tretchikoff became a propaganda artist for the British Ministry of Information. Tretchikoff was aboard a ship to South Africa 1942, when the Japanese attacked the vessel. After being a prisoner of war, the artist arrived in South Africa in 1946 and made it his home. 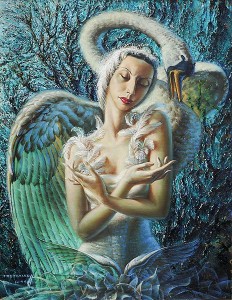 Successful exhibitions in Cape Town and Johannesburg showcased portraits and still lifes. From South Africa Tretchikoff’s success soon spread across the globe. Tens of thousands saw works by “The King of Kitsch” in London, San Francisco or Los Angeles.

The painter died in Cape Town in 2006 with his prints on mantelpieces throughout the country. The Russian born international best-seller is now honoured in his adopted country. “We want to finally acknowledge Tretchikoff as a prominent artist in the country’s history and to acknowledge the millions who loved his work,” says the Director of Art Collections at Iziko Museums, Riason Naidoo.